Home » Cycling » A Weekend Ride and the Difference Between a Full-Aero Bike and a Standard Road Bike.

A Weekend Ride and the Difference Between a Full-Aero Bike and a Standard Road Bike.

My buddy Chuck and I went for a ride yesterday.  I was tempted to take the Venge out but I opted for my Trek instead.  I pulled it off the trainer, swapped the trainer wheel for my outdoor wheel, and readied it to roll.  I love riding my Trek now that I’ve got it right (or at least, this version of right).

Chuck and I rolled out at 1 pm to give it a chance to warm up.  His fever finally subsided Saturday and I didn’t want to stress his system… and I am not particularly fond of riding in temps below freezing anyway.  The goal, agreed to before we left, was for an easy paced ride but we had a problem.  The wind was out of the southeast.  From my house (Chuck lives just two miles away), there really aren’t many good routes that head east and south first.  We’ve got southwest, northwest, and straight up north or west covered, but everything east is ugly.  We had a southeast wind so even our north/south route was pooched because it’s all north to start.

The route we decided on a good first and third quarter.  The second and fourth were gonna suck.  We rolled out slow and easy with a nice tailwind push.  The first quarter was wonderful and we talked about a lot… from a socially distant distance.  Then came the second quarter, several miles dead south, and that’s where it got a little ugly but it wasn’t horrible.  We just kinda kept after it.  A little more cross-tailwind for the third quarter that was nice, but I knew we were going to have to pay the piper when we turned for home.  It was going to be a long stretch into some ugly headwind.

I hate headwind on the way home.  Don’t get me wrong, it beats not riding by a lot, but it’s still a tough way to ride.  And that was when I realized how much more power is needed to keep the Trek up to speed.  I powered on, but I definitely didn’t like it.  Holding 18-mph into the 13-mph headwind wasn’t easy at all… and that’s where my aero Venge shines brightly over the Trek.  With a tailwind, both bikes are fantastic but when the going gets tough, the Specialized slips through the wind. 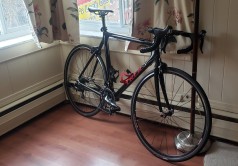 I can’t quantify with power data the increase in wattage needed to produce identical results on both bikes, but it’s a fair amount.  On a day like yesterday, it’s the difference between being smoked after 35-1/2 miles and having a good workout.  The GCN boys actually worked this out once, too.  If memory serves, Simon figured watt for watt it was the difference between a 20 minute ride and a 50 minutes… it was a big advantage.

When I ride the Trek I try to look at the bright side:  Every time I ride it, I’m getting faster for where it counts.  Tuesday nights.