There is a debate amongst we cycling enthusiasts, almost as heated as disc brakes on road bikes, about the pluses and minuses related to internal cable routing on road bikes. Many contend that the only “Aero Bikes” should bother with internal cable routing… This would be the TT bikes and road racing bikes such as the Specialized Venge, Trek Madone and Pinarello Dogma (and many, many others)

Done properly, the cables are housed in the frame to cut down on drag…  As an added benefit, they are also protected inside the frame from sweat, dirt and road grime that would normally rot them out within a season (two if they’re meticulously cared for).  Now, depending on who you talk to, cables should be replaced every season anyway.  I’d have argued that last year but because I can now change the cables and index the derailleurs in about twenty minutes, while carrying on a conversation with my wife, replacing them is a lot less daunting than when I didn’t know what I was doing so I’m more willing to change them.

That said, there are some cons to internally routed cables.  First, if the shop that puts the bike together makes a mistake – and sometimes even if the shop did everything right – the cables can cause internal creaks and groans that can take forever and a day to locate and get rid of.  Also, if you don’t know a couple of tricks of the trade when it comes to fishing lines (tie a string or tape the new cable end to the snipped end of the old cable and pull the new one through with the old one) through concealed places, trying to replace old cables can get ugly in a hurry with an internally routed bike.

1.  Sweat maintenance.  I sweat when I ride because I ride hard.  In fact, I sweat buckets – so when you’re cruising down the road at 25 mph and a drop of sweat falls from your melon, where do you think that drop of sweat hits the bike?  Right on the cable housing zert just in front of the saddle in the photo above.  It also collects at the underside of the frame (under the bottom bracket – yes, I sweat that much) on the stainless steel plate attached to the frame that holds the two shifter cables in place.  Before I was aware of this as a problem, when I took the bike in for a shifting problem (related to sweat messing up the cables under the bottom bracket), the mechanic noticed that the housing end had become infused with salt, inside of the zert that holds it to the frame.  He had to drill everything out, and install a new housing before the brake started seizing.

2.  Rain maintenance.  Now this one hasn’t been, and hopefully will not be, tested on my new Venge because it hasn’t seen anything worse than a few sprinkles, but the rear derailleur housing on my 5200 picks up a ton of rain off of the road.  I have to loosen the cable, clean out the housing and relube the cable, hook everything back up and re-adjust the derailleur after every ride in the rain or the shifting becomes completely pooched over night. Now that’s not such a big deal to me, because I can fix that in ten minutes (including the index adjustment), but to someone who doesn’t know what they’re doing, that’s not exactly a simple fix.  It usually means a trip to the bike shop and a few days off of the bike.

See that little cover where the cable comes out of the frame?  Yeah, that fits tightly around the cable to keep water and/or sweat from getting into the frame – and if you need to clean them, the little screw takes an Allen wrench.  Specialized thought of everything.

In short, while the cable maintenance and repairs aren’t that big of a deal, not having to do them is, quite obviously, much less work and a wee bit less time consuming.  There may be complaints with other bikes, but I love my internally routed cables.

If my bike’s internally routed cables weren’t enough, I went next level: 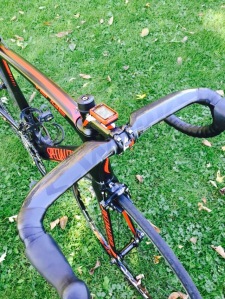