Home » Cycling » The Cyclist’s Guide to Color Coordinating EVERYTHING, From Bike to Kit

The Cyclist’s Guide to Color Coordinating EVERYTHING, From Bike to Kit

There are a dozen different types of cyclist so this post will probably only fit a very specific group.  Also, this will be based on several separate faux pas of my own.  First, not everyone will care about whether their bike and kit matches perfectly – I ride with several.  The important thing to remember here is that this is not golf where they say that if you can’t play well you should at least look good playing poorly.  In the case of cycling, especially when you’re riding in a group, it is far better to ride well than look good.

In addition, functionality is often far more important than making sure everything matches down to the zipper.  For instance, I have a yellow wind vest that has a mesh back to allow moisture out while blocking the wind up front.  It has three back pockets (where many have none) and has my local shop’s signature logo on it.  It’s also excellently colored for our dreary fall.  The functionality of the piece of clothing is perfect, even if it looks odd on my black and red bike.  Now, could I have found a red or black vest with the same qualities?  Addressing all but the visibility issue, yes.  In fall though, sticking out in the dreary weather is a little more important than looking spectacular – unless you want to look good as a hood ornament.

I’ve tried just about everything to make my bikes look good while looking unique.  At first, I was big on the Red, White and Blue theme.  This was okay with my Cannondale (blue and white bike, red bar tape) though I went back to blue, white and black in the last year or so (the bike’s original colors).  I also tried this with my custom painted Trek 5200.  Unfortunately the bike isn’t a bright, fire engine red.  It’s candy apple red with gold flake so it comes off a deep red/orange.  The blue, now that I’ve had a couple of years to mull it over, just doesn’t fit: 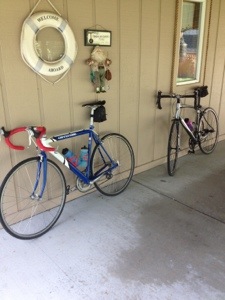 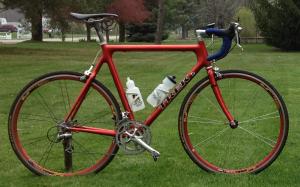 The Cannondale, at least in my opinion, pulls off the red, white and blue better than the Trek.  The Trek is not bad, of course, but black bar tape would look better on the Trek.  The point I’m trying to get at with these first two bikes is that I tried to force the colors on the bikes.  I wanted what I wanted and I made my bikes conform to that.  Unfortunately you’ve gotta work with what you’ve got.  To illustrate, my buddy Mike just had a frame fail on him – the carbon started to fray around the seat post.  His was a beautiful bike, candy apple red with silver flake and black.  He took it to the shop and they sent it to the manufacturer who promptly replaced the frame with the best frame they offer.  Sadly that frame is a gnarly green, white and black with a little bit of baby-poop yellow in there to liven things up.  Folks, there isn’t a lot you can do to fix that.  You pretty much just have to roll with it.  Black (or white) bar tape and saddle, and that’s about it.  My Venge is another excellent example though the possibilities are more numerous.  My bike came with some pretty plain-Jane looking black rims on it.  I broomed those for a set of wheels that made the red and black pop by throwing a little white into the mix: 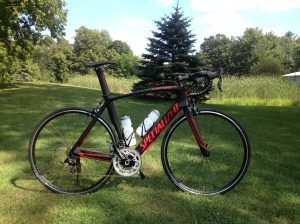 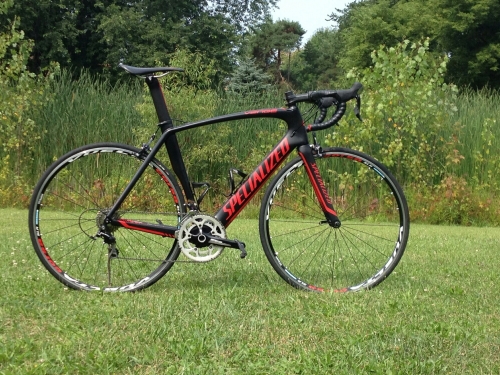 Now, there’s some cleaning up to do at the cockpit, I’m well aware of the fact that I’ve got one too many spacers stacked atop the stem.  Stay with me here, we’re talking about color coordinating a bike for Pete’s sake.  Notice how the simple addition of the white lettering on the wheels takes that bike from nice, where it was prior, to “holy crap, it’s freaking awesome”?  Exactly.  That little bit of white lettering takes the emphasis away from the polished aluminum brake surface, making the wheel “pop”.  I spent three weeks researching wheels to find the wheel set that a) matched my bike and b) came in at a decent weight (1460 grams).  Now, going back to the cockpit again…  The stem on the bike is one of those inner adjustable do-dads that Specialized loves so much…  With a turn of an internal piece, you can adjust the angle of the stem by a few degrees without the ugliness of one of those God-awful adjustable stems.  A really cool idea, unfortunately they’re heavy and have no place on a high-end bike (the idea being, once you’re ready to plunk that kind of cash down on a bicycle, you already know the angle of the stem you’ll want on the steed).  Not only that, the front end is a little bit lifeless…  So I swapped the stem and added this: 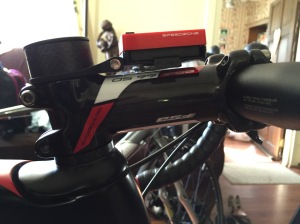 Notice the red and white matches the paint job perfectly – even the shades of red match.  This throws a splash of awesome at an otherwise ho-hum part of the bike (again, once I get my new handlebar in I’m having the stem cut down to get rid of one of those spacers so I’ve got a small spacer above and one below the stem).  It took me two weeks to lock down that stem (the bar was a little bit easier because it’s a Specialized bar – it automatically matches the bike).  Also, notice that’s a FSA stem?  Look at the crank on either of the photos of my Venge…  That’s a FSA crank that came with the bike.  In other words, try to keep things in the family…  Also, while we’re on the photo above, notice the computer above the stem.  This was a tough one for me because the red of the computer is a little bit more orange than the bike’s paint.  While this is a minor faux pas, I can live with it even if I should have ordered a black one.

Now for the kit, the clothing.  Because my bike is red and black, cycling clothes are easy.  Red, black and white jerseys are a dime a dozen out there so finding four jerseys that matched my bike took all of ten minutes.  For the shorts, black always works.  When it comes to the shoes and helmet though, I went a little rogue.  Fashion would probably dictate that black shoes and a black or red helmet are in order.  On the other hand, black holds heat and radiance from the sun while red attracts it.  With today’s modern jersey material, this isn’t such a big deal because the moisture wicking materials stay cooler but when you’re talking about a melon protector, right on the one part of the body that needs to stay cool, I wasn’t too fond of black or red so I had to think a little “outside the box”.  I went with white, both helmet and shoes so I’ve got white on the tips – north (helmet), east and west (wheels) and south.  Now, this choice is debatable but I think it works well considering: 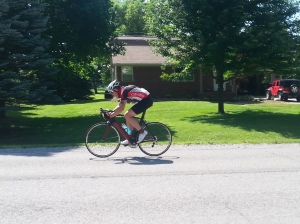 As you can see in the photo above, I’ve gone all out – red, black and white socks (3 different pair), red and black gloves, etc. but that doesn’t really encompass the whole story because I was actually quite lucky.  The bike that caught my eye had a fantastic paint job right from the factory.  You literally can’t go wrong with red and black – it looked like a sports car sitting on the display above the front counter.  The tough sledding is when you pick up a bike that’s black on black, or even tougher, off-colored.

Whatever the case is with your bike, if you have a penchant for matching it up, take your time shopping.  Certain wheel brands, such as Flo, allow the customer to choose their wheel accent color.  If all else fails and you have an oddly colored bike, there’s one simple catch-all trick that will save you:  Black works with everything.  In the case of a black on black bike, if you want your steed to look unique, I’d suggest against white wheel decals.  They do look good but everyone goes that route.  If you want color, try going with a blue or red so you can mix up your kit a little bit.

I’ve seen everything from perfectly matched setups to the disheveled look where nothing seems to have its place.  The main thing that matters, no matter what, is how the bike is ridden.  If the cyclist is good, all is forgiven.  Even a failure to shave the guns.

UPDATE:  WOW, this is an old post… Um, a lot has changed since this was written.

This is my Trek now: 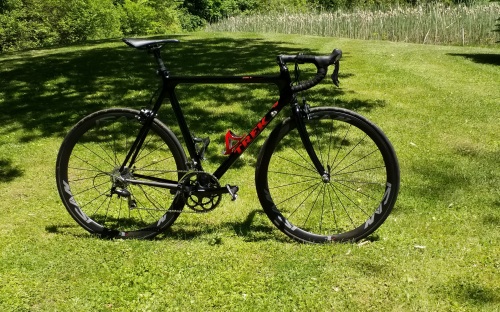 I had the bike painted, and had it done up to match my Venge: 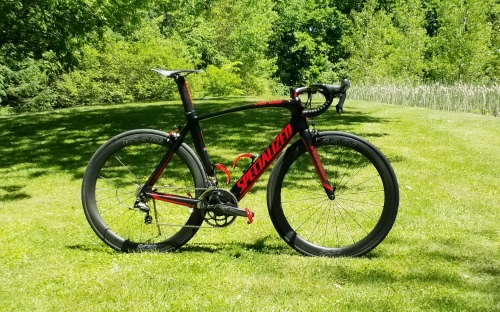 The wheels were upgraded on both bikes, both bikes got new drivetrains and, well, most of the parts that could be updated, were.  They’re both new bikes, basically.  However, as you can see, the main theme was carried through.

Like Loading...
By bgddyjim in Cycling, Fitness, Humor on October 6, 2014.
← The Only Excercise The Noob’s Guide to Bicycle Tire Pressure: If You Want Speed, How Much Already?! →